I finished the C25K program about six weeks ago.  As such, I’m six weeks into the 5K to 10K program, also from Active.co

The C25K program was extremely successful for me.  It gave me endurance and more strength for my runs, and made me excited about doing better.  If you aren’t

excited to improve, you’re just not going to improve.   As I was starting the C25K program, my wife suggested that we take on the Warrior Dash in a few months.  Of course, I thought this was a horrible idea.  At least, at first.  After some thought, I thought it might be nice to have a reason to train.  Additionally, I w 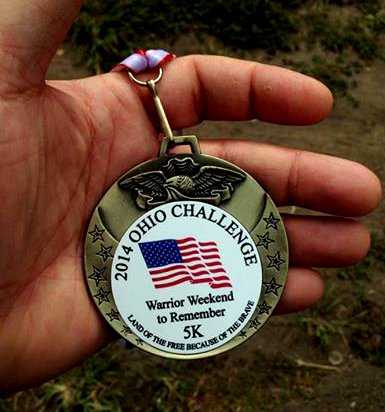 anted to do a 5K race first – a practice, I guess.  We settled on the Ohio Challenge Wounded Warrior Weekend to Remember 5K Run/Walk.  It was about a month before the Warrior Dash, so it seems to me like it would be good practice.  It was, and was definitely worth it.  It was a lot of fun.  I wasn’t quite hitting 5K in my runs yet.  Close, but still a

half mile or more off most of the time.  The race itself was my first complete 5K.  It was an eye opener.  I started off too fast, I didn’t pace myself at all, and I used up everything I had in the first 2.75 miles.  The remainder of the race I had almost nothing left.  My time was decent (30:17  , not bad for a first race) but I crossed the finish on autopilot.  Still, I learned a few good lessons about fueling myself and pacing myself.  It was a great experience, and helped me to run the Warrior Dash much more efficiently.

This entry was posted in Running. Bookmark the permalink.